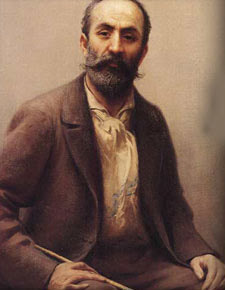 Fausto Zonaro (Masi, 18 September 1854 - Sanremo, 19 July 1929) was an Italian painter. He was the first of six children of Mauritius Zonaro, bricklayer, and Elizabeth Bertoncini. He was talented as a child. He studied in the Technical Institute of Lendinara City and then at Verona, at the Academy Cignaroli directed by Napoleon Nani.

Then he opened a small school of painting in Venice, but his work also frequently leaded him to go to Naples. Among the most important achievements of this period, particular emphasis has a cycle of about thirty batter with views of Naples and its surroundings for the villa of the Duke Paolo Camerini, now Villa Simes-Contarini in Piazzola sul Brenta.

The turning point in the career of Fausto Zonaro happens in 1891 when he and Elizabeth Pante, his ex-students in Venice and became his girlfriend, decides to venture into the East, Istanbul, Constantinople then.

In Istanbul, little by little can be known in aristocratic circles, received orders increasingly important until, in 1896, he was appointed court painter, thanks to the intercession of the Russian ambassador, for whom he created some works, which presents the Sultan Abdulhamid II. "The regiment imperial Ertugrul on Galata Bridge" bought immediately. The sultan ordered Zonaro a number of other works, notably a series of paintings on the epic of Mehmed II The Conqueror.

Fausto Zonaro lived in Constantinople until 1909, then he returned to Italy following the coup that deposed Sultan Abdulhamid. He moved in San Remo and continued to paint small views of the Ligurian Riviera and the nearby French Riviera until his death in 1929. He is buried in the Cemetery of the Foce di Sanremo.

Many of the works of Fausto Zonaro are still preserved in the most important museums of Istanbul, including including the Topkapi Palace, Dolmabahçe Palace and the Imperial Military Museum.

Popular posts from this blog

By fotoGezi.blogspot.com September 18, 2010
The German Fountain is a gazebo styled fountain in the northern end of ancient Roman-Byzantine hippodrome, Sultanahmet Square, Istanbul, Turkey. It was constructed to commemorate German Emperor Wilhelm's visit to Istanbul in 1898. It was built in Germany, then transported piece by piece and assembled in its current site in 1900. The neo-Byzantine style fountain's octagonal dome has eight marble columns, and dome's interior is covered with golden mosaics.
Read & see more »